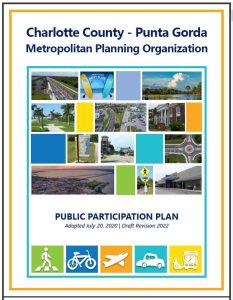 The Charlotte County-Punta Gorda Metropolitan Planning Organization (MPO) announces that a public comment period on proposed revisions to the MPO’s Public Participation Plan (PPP) will be available for public review until December 13, 2022, before the Charlotte County Punta Gorda MPO Board reviews it for adoption at their December 15, 2022 meeting.

A key provision requires that all MPOs develop and utilize a PPP that will provide a minimum public comment period of 45 calendar days, for all interested parties, before the initial or revised participation plan is adopted by the MPO.  [23 C.F.R. 450.316(a)(3)]

Printed copies of this document will be available for review at Public Library locations throughout Charlotte County.

Comments can be made by contacting the MPO at:

Check out our new Transportation 101 Section!

How to use a Roundabout

Above video from FDOT explaining how to use a roundabout.

At the July 28, 2022 Metropolitan Planning Organization Advisory Council (MPOAC) Meeting, the Charlotte County-Punta Gorda MPO was recognized by the Noteworthy Practices Committee for the MPO’s use of drone technology to develop Charlotte County’s Bicycle Pedestrian Plan. 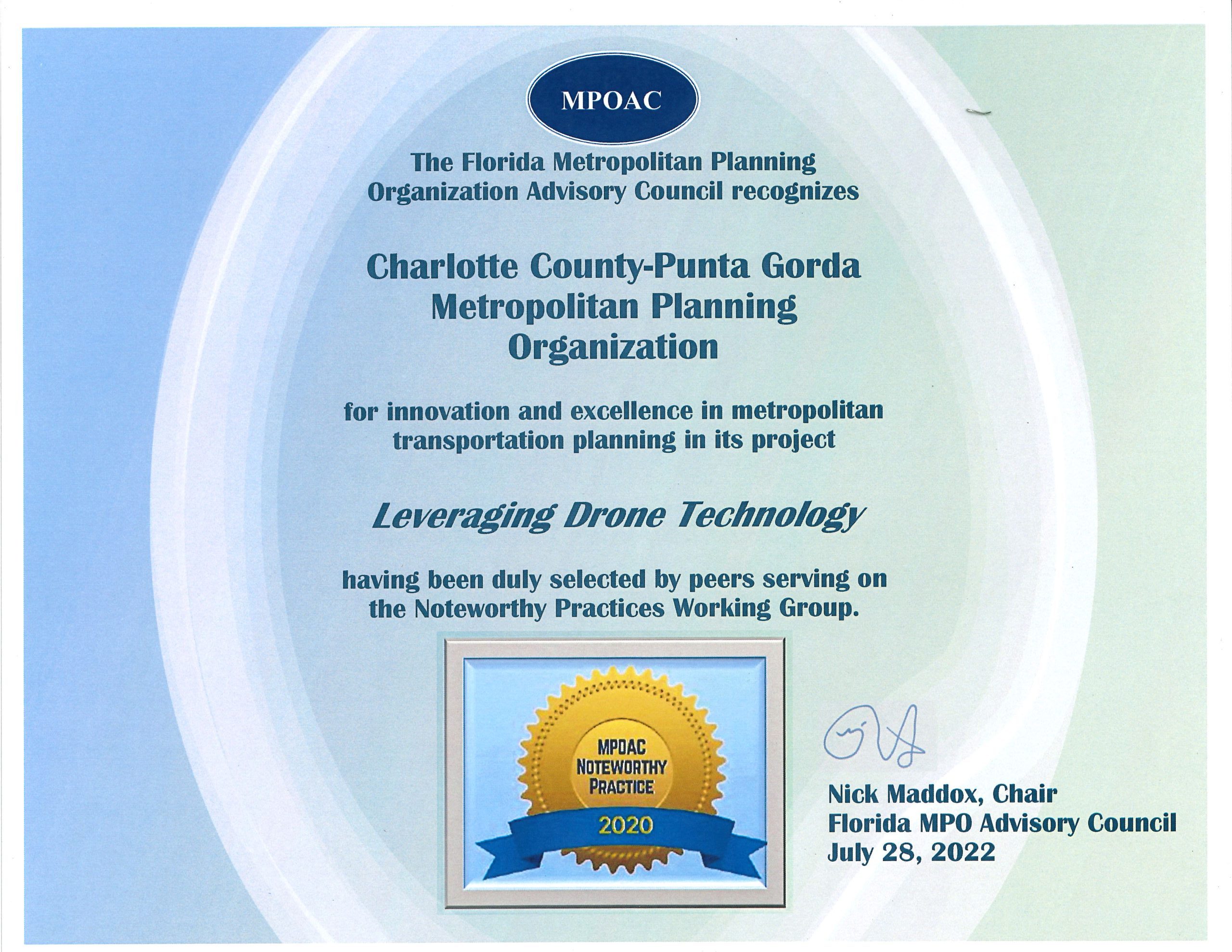 What is an MPO?

A Metropolitan Planning Organization (MPO) is a federally-mandated and federally-funded transportation policy-making organization that is made up of representatives from local government and transportation providers. The United States Congress passed the Federal-Aid Highway Act of 1962, which required the formation of an MPO for any urbanized area (UZA) with a population greater than 50,000. 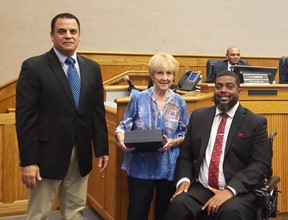 At the July 18, 2022 MPO Board meeting, Mrs. Sue Brown received the 13th Annual Peggy Walters Award, on behalf of her husband  of James “Jim” Brown. Jim Brown was posthumously honored with the 13th Annual “Peggy Walters” Citizen Mobility Award.  The Award recognizes achievement by an individual or group who, through their efforts and accomplishments, has made significant and noteworthy contributions to transportation planning in Charlotte County. As a long-time Charlotte County resident, Jim Brown showed by example that one person through his efforts and vision, can greatly improve transportation mobility and community enhancements in Charlotte County, just as Peggy Walters so epitomized. 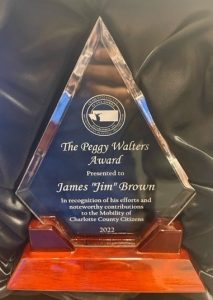 Past Recipients of the Peggy Walters Award Include:

MPO Board Meeting
The MPO Board meeting is scheduled for December 15, 2022, at 2:00 PM.
This meeting will be held at
Murdock Administration Building,
Room #119, 18500 Murdock Circle,
Port Charlotte, Florida
All Members of the Public are welcome to attend. Persons wishing to provide public comment still will be allowed to do so by alternative means. Written comments may be submitted by either emailing the comments to office@ccmpo.com  or mailing the comments to Charlotte County-Punta Gorda MPO – Charlotte County Administration Center 18500 Murdock Circle, Bldg. B, Room 200 Port Charlotte, FL  33948
Comments must be received for the MPO meeting by Noon December 14, 2022.  The comments will be read by an MPO staff member during the meeting for that item to be placed in the record.  Please contact MPO if you have any questions or concerns.

All Members of the Public are welcome to attend. Persons wishing to provide public comment still will be allowed to do so by alternative means. Written comments may be submitted, no later than noon January 6, 2023, by either emailing the comments to office@ccmpo.com or mailing the comments to Charlotte County-Punta Gorda MPO – Charlotte County Administration Center 18500 Murdock Circle, Bldg. B, Room 200 Port Charlotte, FL  33948
Current Vacancies

Currently we have two vacancies on Local Coordinating Board (LCB): one Disabled Representative who is disabled, and one Representative for the Economically Disadvantaged ” A person who is recognized by the Florida Association for Community Action (President), representing the economically disadvantaged in Charlotte County”.

The Deadline for applying is December 2, 2022. If you are interested one of these positions, please use the form below.

The MPO is required to annually develop a list of project priorities as part of the Transportation Improvement Program (TIP) process and to submit the list to FDOT.  FDOT has asked that the priorities be submitted by July 1.

END_OF_DOCUMENT_TOKEN_TO_BE_REPLACED

The Charlotte County MPO coordinates with the following local entities regarding the transportation network within the MPO’s planning area boundary. This boundary includes Charlotte County, the City of Punta Gorda, and the southwest portion of DeSoto County.